The the other day, we were doing some of this and loving it.


My Son starts tugging on my coat and keeps telling me, "Ook, its h-horange. Ook Mom. OOK!" Turning to see what he is pointing to, I see this: 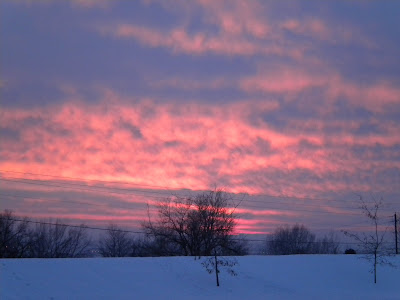 I Can't Make This Stuff Up.

I will try to approach this subject with finesse and humor. In no way am I intending to offend anyone. (especially my proof reader)

So this couple has a few kids. They are in their late 30's. So the likelihood of what I am about to tell you goes up a bit. You see the man in this relationship has a job that he is not happy in. He has also decided that he is not sure about his chosen profession in general.

So the man and woman are in their kitchen one night after their children are in bed. The wife had removed some pork chops from the freezer the day before and put them in the refrigerator to defrost. Not thinking, the wife did not put a plate under the defrosting offender. There a was a fairly slimy mess that had to be dealt with. The husband is the one to discover this mess. Being that he is the sweetest man to walk the planet, he begins to clean it up with out complaint or ridicule of the wife who so thoughtlessly ruined a fair amount of fruit. Certainly the wife will not allow the husband to clean up her mess alone.

As she begins to help, she notices some clementines on the counter and asks if they were in the drawer that was contaminated. The man responds with, "yes." Any smart wife would have just tossed them.....but not this wife......she begins to check them. It seems that a few of them may have missed the mess since they were in the front of the drawer and on top of the bag. Contemplating that there may be a way to salvage a few of these clementines she asks her husband his opinion. He responds with a very non-committal answer. This is a sore spot with the wife. She tells him he is such an "engineer" that he will not give a definitive answer on such a simple question. To which he responds with something that had the terms, "variables and outliers" in it and something to do with he "gives enough information that someone ought to be able to come to the conclusion on their own." To which the woman responds with, "Can you just give me a definitive answer?" Now the husband is getting a bit irritated. So the wife tosses out the clementines. As the conversation continues, the husband tells the wife to go, he will finish the job. Clearly he is angry. He states somewhere in this discussion that he doesn't like it when he is called an engineer. This of course hits a funny bone with his wife since she has seen his business cards which clearly state he is a specific type of engineer. At first the wife is just snickering, but then, as the whole thing continues to play out in her head, the full-on "cackle," as the husband puts it, comes spilling out.

The wife goes upstairs and washes her face and puts on her PJ's. She can now hear that he has finished cleaning up the mess. The husband makes no attempt to come up to bed even though it is late. Slightly irritated the wife crawls into bed. A few hours later the "non-engineer" makes his way up to bed. The husband is typically the type to be very careful not to wake the sleeping, but not this night. So the wife is awakened. She lays there trying to go back to sleep. Sleep will not come. She finally decides it would be a good idea to climb into the guest bedroom bed and read the letters from when they were dating. The hope was to find reminders as to why she thought this relationship would be a good idea. Would you believe that the first TEN letters read infuriated her more. There was a lot of indefinite-ness in them, at which point, the husband walks into the guest bedroom. He reiterates what was discussed earlier. When he is finished, he asks what he should do now. She suggests he go back to bed and get some sleep. He goes back bed. The wife picks up the eleventh letter and is instantly reminded why she committed to this man. His words, "You are so beautiful. I see your face everywhere. It's in my mind. I look at your pictures as often as I can. None of them do you justice. You have so much grace and class it's unbelievable. I know to you this doesn't seem like anything, but if you knew how it makes me feel inside you'd see a whole side of you that you didn't know existed. I love you." So when the husband came back into the guest bedroom a few minutes later and requested that the wife come sleep next to him so he could sleep, she responded with, "In just a minute. I'll be right there." See, mostly happily ever after.

This should be the end of this post, but the stuff just kept coming. So few days later, the wife is sitting in bed checking e-mail and facebook before going to sleep. As she finishes up she looks over and realizes that the man she married is, and has been, working on something quite intently for a while and is showing no signs of letting up anytime soon. Curious, she asks what he is doing. He responds with all the football teams he has picked to win in college bowls have won. He continues to tell her he is making an algorithm to help him pick the rest of his teams. Remembering the conversation from a few nights before, the wife quietly chuckles to herself. She softly tells him he is making it really hard on her.

A few days after that, one of the couple's children has drawn a picture that so far had included three people. The daughter asks her mother if she knew who the people were. Before the mom could answer, the non-engineer in his mid-life crisis, answers and says, "Is this you and your sisters?" To which the daughter burst out in tears and wails, "I'm not half bald! That's you!"

Labels: Confessions, shame-where is it when I need it
Newer Posts Older Posts Home
Subscribe to: Posts (Atom)