Is it genetic....because it sure isn't enviroment?!

My darling son is a charmer. You can ask any one who has spent any amount of time with him. There are days I would go as far as to say that he has the making of a womanizer. Yes, I know, I need to keep an eye on that.

Even when he was really little these traits would make themselves known. The Rocket Scientist had some Christmas Shopping to do, when there were only three of them. That would have made My Son around 2ish. Now mind you, he just recently started saying words and sentences we can mostly understand. So in these days I'm referring to, it was all gibberish and smiles. Well the Rocket Scientist is in Target doing some Christmas shopping for his kids. He has My Son with him. In the Rocket Scientist's words, "Your son picks out the hottest, best lookin', stacked woman in the store and starts chatting her up." Yeah, that's great huh? My Son has continued this type of behavior over the years and yes, he does seem to find the most attractive women with, hmmmm, how to put this delicately..................with the plentiful chest. This can be rather embarrassing as a mom. Especially since that particular description does not describe me. In fact, the Rocket Scientist has made it clear that if I were ever to decide to leave him.......he gets My Son. He claims it would be his only chance of ever having a date again.
Now, you need to know that the Rocket Scientist is not a womanizer. Not in the least. He is terribly shy by nature and analytical, making it somewhat difficult for him even to flirt with the woman that makes it clear daily that he is the only guy for her. So, as I am becoming more aware of what My Son has to say, I realize his favorite character of all time is "Puss in Boots" from Shrek. He has made it so clear that he is requiring us to call him Puss these days. Yeah.......that 's right. He wants us to call him the name of a womanizing, fictional cat. I find myself asking, is this genetic?, because the RS certainly is not providing the environment. Or maybe it is too many times watching the Shrek movies, providing the environment.? Either way, "Houston we have a problem!" 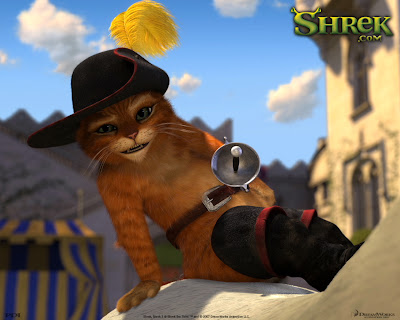 Yes, it sure does sound like you have a problem. I wish I had some advice on that one but all I can do it laugh at you, I mean with you.

That's pretty funny! And yeah, keep an eye on him!!!

It can't be helped. I've seen it among my own nephews. Some boys are just born to be super cool little lady's men. All you can do is sigh and shake your head at your super cool and smooth little guy.

it could be gaston from belle...at least he's not a jerk! but he does lick his, well...ok, i'm stopping now.

How funny, I do find little boys can get the ladies in stores,but little girls are too interested in looking at the new toys to look at and talk to people.

My SIL told me she took my nephew (her son) to a bday party last weekend. The mother of the bday boy was wearing a very low cut dress and she was very large on top. Tanner was looking right at her boobs and told my SIL that is a very beautiful dress she has on. I laughed so hard when I heard that. He takes after his father and uncle (TNT)

I LOVE Puss in boots from Shrek. Antonio Banderas was perfect for that character.

Too funny about your son. Little stinker.

this is so funny! Yeah you gotta love puss!!! Those eyes!!!

I do love that cat, but only in the movie environment. Can I laugh because it's not my child this time?

TOO funny! I do NOT envy you in ten years. Heh.