One from the Rocket Scientist

Today has been a rough one. The Rocket Scientist in all his sweetness has written the post that I desperately needed written tonight, but could not do myself.

In addition to the pictures of the Sea Monkeys in shopping carts at home improvement stores, there were pictures of birthdays, Christmases, Halloweens, and vacations. I saw kids playing in desert yards, Great Plains yards, and yards buried (and I mean BURIED) under the Greatest Snow on Earth. If you don't believe me, read the license plates. It says so right there. I saw pictures of kids who sneaked off to fall asleep in their beds and pictures of kids who sneaked out of their beds to fall asleep on the floor. There were pictures of kids blowing out candles on cakes, eating cakes, and, of course, wearing cakes. As I looked at these pictures I noticed two things--not a single picture of my beautiful wife and I am (and I can prove it beyond a shadow of a doubt) the most fortunate man who has ever lived. And for that I am grateful. Blessings have been lavished upon me that I will never deserve.... I know that and I acknowledge that.

And despite all the feelings of gratitude, I hadn't found the picture for which I searched. It was a needle in a haystack. See I was looking for this picture (or a semblance, thereof). 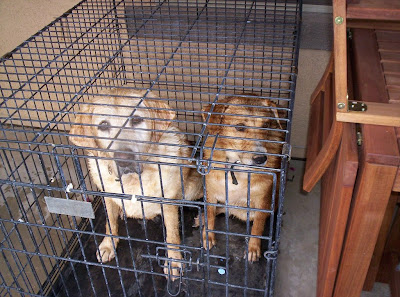 See, the yellow lab (to the left) is Sabrina. You've seen a picture of her before. Sabrina is a Guide Dog flunkie. I've been advised to refer to this as a "second career", so as to avoid injuring her delicate self-esteem. Sabrina is my dog. The dog on the right is Penny. We got her as an "oops" from a friend. Penny is Sabrina's dog. I'm certain Penny cannot remember a day in her life without Sabrina.

Sabrina came to us in the summer of 1998, just a few months after we moved into our first house. She was, bar none, the best trained dog in neighborhood...until I got a hold of her. Sabrina has lived in every state in which I have lived. Really. California (for guide dog training). She moved back to Utah in 1998 to become my dog. She moved from Utah to Kansas with me in 2003. She moved from Kansas to Arizona with me in 2004. She was even willing to move back to Utah with me in 2007. For each move, Sabrina rode in the vehicle I drove. We played together, ran together, wrestled together, and hid out in basements during tornadoes together. We traveled the road between Clinton, Utah, and Carlsbad, California, who knows how many times together. I could go on and on about the things we've done together. This picture reminds me of Sabrina's favorite pasttime. I was, so often, the recipient of her expressions of love. 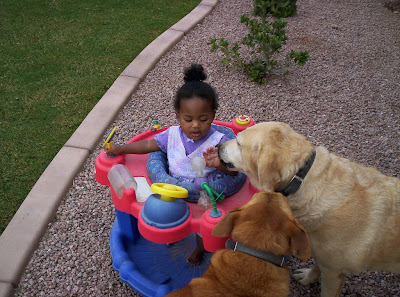 Sabrina and I have spent many days and nights side-by-side. She is gentle and concerned by nature. She is massively expressive with her eyes and eyebrows. She truly broke me in as a pet owner. I have always planned on being the one responsible for all of her care, regardless of what she required. However, I wasn't with her last night. I was 1,442 miles away from home, on business in Nashville, Tennessee, and Huntsville, Alabama. Sabrina left us in her sleep.

I've spent the day trying to occupy my mind with (what today anyways seems so trivial) thoughts of how to ensure the rocket that will someday carry astronauts to the International Space Station & the moon will function properly and meet its intended mission. Each time I lost focus, I had to fight the tears that wanted to flow knowing I will never have the opportunity to see my own "man's best friend" again.

I thought of my wife, who, once again, had to face a difficult challenge alone, because, once again, her husband was across the country (or across the ocean) on business (I am so sorry you had to handle this Karen). I thought of the Sea Monkeys, who, even though they try, will take several weeks to grasp that Sabrina is really gone. Even the First One is struggling with the concept, despite having lost one of our cats a couple of years ago. The Little Jamaican won't get it for several months, or maybe even a couple of years. I think about Penny, who, last night, lost her master, her friend, and really her momma. I've been told her tail has been between her legs all day long trying to figure out why she's alone.

Mostly, I think about Sabrina, and the years we spent as companions...the miles on foot, the miles by car, the of number times I wore my arm out throwing balls for her, the time my dad hit her with an aluminum bat because she was to impatient for the ball to actually get hit far enough for her to run after it, and the amount of things she destroyed even within the last couple of months with her teeth (I thought labs outgrew chewing). Mostly, I think about how grateful I am that yesterday afternoon, before I left for the airport, I had the opportunity to watch her run, full-bore, to her feed bowl. I'm also glad that I heard she ran the yard last night before going to bed. Sabrina, we will all miss you. You're a great pet, great dog, and great companion. I will, however, miss you more than the others...I knew that would be the case, though.

Lastly, I think about the three incredibly kind neighbors (one state trooper, one municipal police officer, and a director of new product training for Novell) who stepped up after I made a single phone call explaining the situation. They took upon themselves the task of removing Sabrina from her kennel and the kennel from the garage so Karen would have so much less to worry. And, to the director, an incredibly deep, heart-felt thanks for taking Sabrina and burying her on your family's farm, where I can stop on my way to or from work and say good-bye to the friend to whom I didn't get to bid farewell.

Good-bye sweet puppy, I will miss you, too.
Posted by Karen at 7:53 PM

I'm so sorry to hear ab out Sabrina! My heart goes out to you. She truly was a dog that I loved. Give love to the kids and Craig for me!

Crying for you all on this end of cyberspace. RS, that was so touching. Sabrina sounds like she had a wonderful life and was blessed to have you all.

You have me in tears this morning. Such a stunning tribute to a beloved pet. As I very often say, pets truly are just another member of the family. We love and adore them, they love and adore us even more and just give love constantly. I am also the biggest of Labrador fans - if you pop over to my blog you will see some pics of our two pups.

Thinking of your family in this sad time. Lots of love and light to you.

I am truly sorry for your loss. May God's arms hold you tightly during this time.

I am so sorry. I had to leave my desk and go to the bathroom so my co-workers wouldn't see me crying. As you know we lost Miss Reagan just a month ago and I know the pain your must be feeling. TNT and I still feel that pain daily when we drive in the yard.

Poor Penny! When Bailey died two years ago Reagan walked around for a month searching for her. Bailey always slept in the closet. When Reagan would get up in the mornings she'd walk over to the closet and check on Bailey. After Bailey passed Reagan would go to the closet and turn around and give us the saddest look. Broke our hearts over and over.

I am thinking of you all!

I am truly sorry for your families loss. I know how hard it can be when you are prepared for these furry babies to "move on" because of warnings. It is harder when you aren't prepared because you don't get to say good bye.

Ok, so totally crying at work. I am SO sorry for your loss. I fully believe that losing a furry member of the family is WAY harder than a flesh one. My thoughts are with you all (and Penny) during this hard time...

Oh alright, I might almost have to consider that perhaps you have the best husband in the world. Dang! But seriously, so sweet!

I am so sorry about the dog! I thought it was bad enough handling a dead hamster with Mike out of town, but the beloved family dog!? Wow, not only the handling of an actual passed away animal (which is trauma enough), but dealing with sad sad kids all alone!! SO Sorry!! I hope Halloween helpd sheer them up!!

P.S> I had to chuckle that your other dog is Penny. I hear dogs named Daisy ALL of the time, I've heard at least two named Goldie . . . and now Penny. Perhaps I need to wuit looking in baby name books to find this new baby a name and begin my search where I will more likely find a name I love -- pet name books! :)

oh sorry that is so tough especially with such a loved dog!! And not being there ugh worse!

I'm so sorry! That's such a hard thing to go through.

Mr. Rocket Scientist, what a beautiful post! I am sorry for the loss of your faithful companion, as well as the loss for Karen & the kids. Help them to understand what Sabrina brought to their lives and what they learned from each other. I hope that will help ease the pain.

Yes, RS, you made me cry. I have never been an animal lover, but certainly have accommodated 5 children in their desire for pets. Life is really richer when there is a pet to love and fill voids in life. I remember how upset I was when my little beta fish, Beethoven died. He was a part of my life.

I'm so sad for your loss. I know Sabrina is very much part of your family and she will be missed immensely. I'm thinking of you.

yea, i'm pretty much behind on reading blogs and just getting to this now. Hope you know we were thinking of you and the kids were praying for you, even if it took me a week to get around to reading your blog.