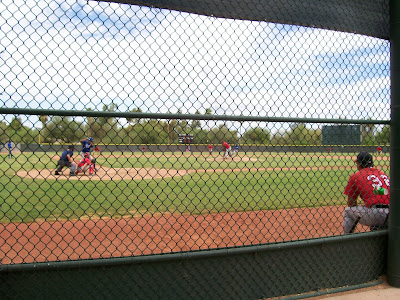 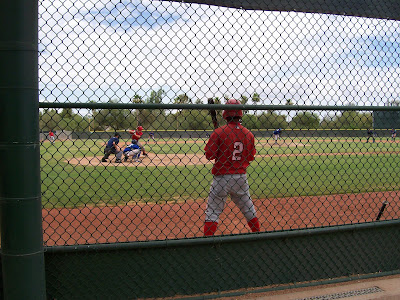 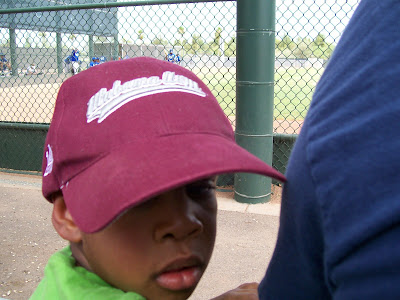 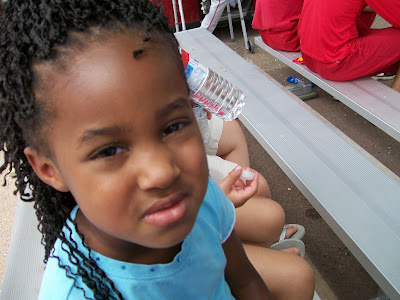 We started Thursday off with a Minor League Baseball game. My children were hot and complaining, except for my Son, who kept asking every time someone new was up to bat, if it was his turn. The kid cracks me up!!! We were there for only the last 3 innings, so we didn't torture them too much in the heat. (Not that you can tell by the expression on the Little Jamaican's face.)

The much anticipated Monsoon season made it's appearance when we were at the Desert Botanical Garden. It started off benign enough. It was overcast, hot and humid, with no chance of seeing the sunset. As we entered the gardens they were giving out personal fans from Target to everyone who entered. They didn't want anyone to get too hot. I think they just wanted to keep my kids hands off the cacti. Truth be known, I'm good with that. This works out really well, because they have a fan in one hand and a flashlight in the other. Well it worked really well till my Son figures out this: 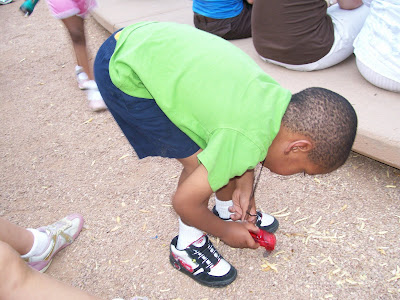 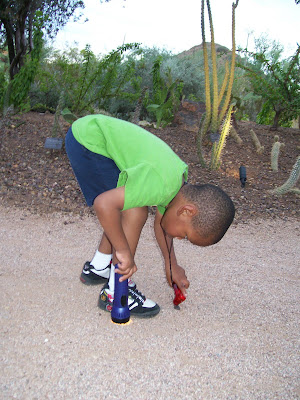 We were enjoying the beautiful gardens and learning about tarantulas, scorpions, and all the other wonders of the desert. 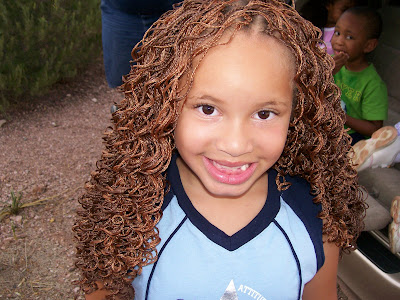 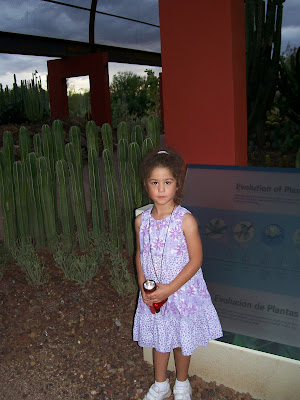 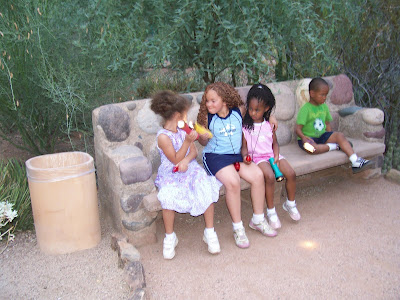 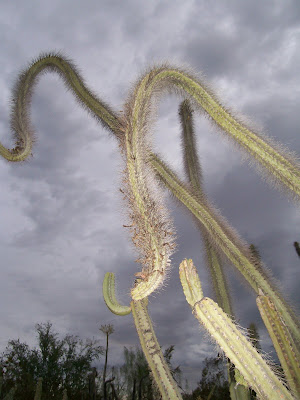 As you can tell from the pictures we were having "fun" when the weather decided to do what the meteorologists have been saying it would do for days. First there were a few drops of rain. My Son and I were at the "kids corner" doing an art project when the wind started blowing...and I mean blowing. Ripping papers out of kids hands and the works. Me, thinking it is just a little storm blowing through, push my kids to continue the tour. It is now raining BIG drops of water and the wind is gusting. I look at the Rocket Scientist and ask if we should go. He thinks so. He thinks the sea monkeys are really freaked out. Just then, I notice the lightning. I guess the rest of my family had noticed it a while before I had. Trees are really swaying now. Some of their branches touching the sidewalk as they blow in the gusting wind. Whatever is blowing in the wind is starting to sting a little when it hits your skin. Everyone else is being ushered into an exhibit type room ahead. The sea monkeys are bustin' a move. They are getting out of this storm. The First Child is holding the Little Jamaican's hand to make sure she doesn't get lost. Another enormous gust of wind flies by and a sudden crack. I look to my left and see the tree, less than 20 feet away, lose a HUGE branch. Half a second later I hear a "thunk" and the Little Jamaican start to cry. My heart pounding, I turn around to see the Rocket Scientist chuckling. The Little Jamaican wrapped around a small pole and the First Child trying desperately move her forward. In all the excitement, the First Child is trying to get herself and her baby sister to safety and walks her into a pole unknowingly. The funny part is, she has still not realized this is what has happened and is still trying to pull her sister forward.

The Sea Monkeys tell us they never want to go back to "that" place again. They some how believe that either storms originate from there or that if we go there a storm will always come. I love this family of mine. They are more fun than I could have ever dreamed of.

Labels: Traveling with children, Valley of the sun


Yikes about the storm!